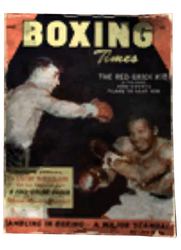 Boxing Times is a skill magazine in Fallout: New Vegas.

A pre-War magazine aimed at fans of boxing, the most commonly found issue is the one focusing on Alvin Nelson, AKA the Red-Brick Kid. The magazine includes an exclusive eight-page feature in full color detailing the Kid's coming of age. It also covers the story of Everts' decision to defeat the Kid in the ring and a scandalous report on gambling in boxing, penned by Joe King.

Reading this magazine raises the Courier's Unarmed skill by 10 points (20 points with the Comprehension perk) for 60 seconds (180 seconds with Retention).

Below is a list of all fixed locations of Boxing Times skill magazines in Fallout: New Vegas and its add-ons. For an overview of magazines per location, see the main overview page.

The boxers on the cover appear to be Muhammad Ali and Jerry Quarry, composited by the texture artist.[1]

Retrieved from "https://fallout.fandom.com/wiki/Boxing_Times?oldid=3351148"
Community content is available under CC-BY-SA unless otherwise noted.