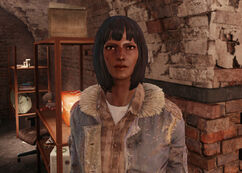 “I've been looking for you. Name's Boxer. Boss called me in on account of some rumors making their way through the Commonwealth.”

Boxer is tasked with looking into and possibly making an alliance between the Railroad and the synth refuge of Acadia located on the the Island.

If engaged in conversation about the synth refugees on the Island, Boxer will make her way there, even if the player character indicates that they want to be left alone. There are no further effects on the plot by doing so.

Boxer appears only in the Fallout 4 add-on Far Harbor.

Retrieved from "https://fallout.fandom.com/wiki/Boxer_(Far_Harbor)?oldid=3395089"
Community content is available under CC-BY-SA unless otherwise noted.