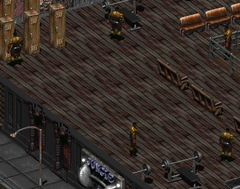 Boxers at the Jungle Gym

“I eat green berets for breakfast.”

The boxers are combatant hand-to-hand fighters at the Jungle Gym in New Reno.

These men each have a career to become boxing champions, and work out in order to sustain injuries before fighting. They are slow-witted, but tough.

Besides daring male characters when spoken to, they also crack a few jokes on females. They are rather scared of others bigger than them, especially if someone wears power armor.

The boxers appear only in Fallout 2.