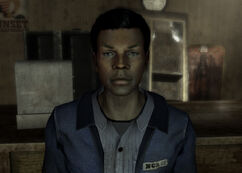 “First I get my legs smashed, then in walks the Powder Gangers' grim fucking reaper? What the fuck have you got against us, man/bitch?”

Boxcars is a Powder Ganger residing in the Nipton General Store in 2281.

Boxcars was a criminal in Nipton who was planning to kidnap some NCR soldiers. Instead, they were ambushed by a group of Caesar's Legion soldiers led by Vulpes Inculta, who forced him and the other townspeople of Nipton to enter a lottery. The winner was let go while Boxcars got second place and, although allowed to keep his life, had his legs crippled by the legionaries. The rest of the gang members were either enslaved, crucified or killed along with Nipton's mayor Joseph B. Steyn.

The player character can give him some Med-X for his legs which, depending on how many doses given, will boost the Courier's Karma but will not affect reputation with the Powder Gangers. He can only be given Med-X once in each transaction. The Courier can give him one (+20 Karma), two (+30 Karma), three (+40 Karma), or five (+50 Karma) doses. Up to three will net Karma and he will use them to heal himself. Five will result in him saying, "A fella could put himself out of his misery with 5 doses" and Karma, though he will not die.

Retrieved from "https://fallout.fandom.com/wiki/Boxcars?oldid=3283237"
Community content is available under CC-BY-SA unless otherwise noted.