The Bowie knife is a melee weapon in Fallout 76.

The Bowie knife is a large clip-point hunting knife with a simple handguard and ergonomic wooden grip held in place by rivets. It has a fast attack speed but short reach. The Bowie knife cannot be modified at a workbench.

Despite the inability to craft weapon mods for the Bowie knife, Bowie knives were previously able to drop with the serrated blade and stealth blade mods pre-attached. These have since been removed from the drop lists and are now legacy content. 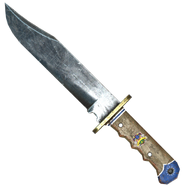