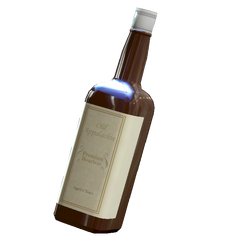 Bourbon is an alcoholic beverage in Fallout 4.

The effect of bourbon is very similar to that of vodka, as both can increase current/maximum health in addition to a boost to carry weight/melee damage (and a penalty to experience earned).

Once a player character is at level 30 or higher, bourbon will give a higher health boost than vodka (at level 30, one endurance yields 10 extra base health and 15 retroactive per-level health, matching the straight-up 25 health bonus of vodka).

When Survival mode is active, this item increases thirst by 3.5 points.

The label references Old Appalachia which is most likely a reference to Kentucky bourbon, a popular version of bourbon from that region.

Retrieved from "https://fallout.fandom.com/wiki/Bourbon_(Fallout_4)?oldid=3268973"
Community content is available under CC-BY-SA unless otherwise noted.