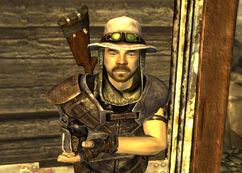 “Better be careful around these parts, I hear there is Powder Gangers around and dangers for merchants like me.”

The incognito bounty hunter's activity has attracted the suspicion of gang leader Eddie, who wants him off his turf. What makes this "merchant" suspicious is that he lacks goods to sell, a brahmin to carry merchandise, and guards for protection, plus the recent deathclaw infestation near Sloan has redirected all merchant traffic to the safer Highway 95. This has made the merchant a trap to any Powder Ganger who would dare to rob him.

Eddie believes the "merchant" is with the NCR, possibly a Ranger.[1]

I Fought the Law - Eddie wants you to "deal with" a suspicious merchant who has been snooping around in his turf.

The bounty hunter appears only in Fallout: New Vegas.

Retrieved from "https://fallout.fandom.com/wiki/Bounty_hunter_(Fallout:_New_Vegas)?oldid=3173060"
Community content is available under CC-BY-SA unless otherwise noted.