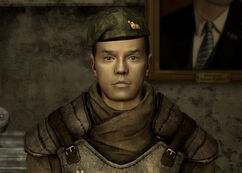 NCR fame (if you save Bryce Anders)
NCR fame
300 caps

“You hear something like a chainsaw, you've found Motor-Runner. Put a bullet in his head, and you'll have some new friends around here.”— Colonel Hsu

Bounty Killer[1] is an unmarked quest in Fallout: New Vegas.

This unmarked quest is "obtained" from Colonel Hsu, the leader of the NCR's main base, Camp McCarran. No prior interaction with McCarran is required for the Colonel to mention that the Fiends are causing a lot of trouble for the NCR, and this can occur by simply trying all the speech paths possible when talking to Hsu, as long as the player is not an enemy of the NCR.

Once Hsu mentions Motor-Runner (who can also be mentioned by Major Dhatri) as well as a Ranger who went missing, you can go to Vault 3 to continue the quest. Going to Vault 3 goes very well in conjunction with the Brotherhood of Steel quest Still in the Dark, as one of the parts for the air filtration system is located in the Vault. Also, the Great Khans quest Aba Daba Honeymoon requires you to deliver some jet and psycho to Motor-Runner in Vault 3.

At Vault 3, which is located in Fiend territory to the west of Camp McCarran (and may be marked on the player's map by either Dhatri, the Brotherhood of Steel, or the Great Khans), the player has two options upon entering. The first is to fight your way through the Fiends' main headquarters, which is not an easy feat considering that Motor-Runner is well protected by a vault-full of Fiends armed with flamers and other heavy weapons. The second, more diplomatic action is to pass a speech check of 64 with a female Fiend at the vault door to convince her you are a Khan selling chems or simply put on Great Khans clothes and you can then enter peacefully.

After passing through the main area of the Vault, turn left and continue following signs until you reach the door marked "Living Quarters." Immediately upon entering the living quarters, take the first left down a hallway and open the last door. This should reveal a dead Fiend (apparently killed by a booby trap) and a hallway with a land mine and a tripwire to a grenade booby trap with one last mine at the top of the stairs. The player must go through this hallway to reach the missing ranger.

Through the door is a hidden area of the entrance hall to the Vault, in which the missing ranger Bryce Anders is hiding. He will say he just needs more time to kill Motor-Runner and that you should leave. From here the player has several options:

If Anders is convinced to leave and healed by the bag he will open a passage from the room he was in, directly to the Vault 3 entrance chamber, and sneak out of the Vault. This allows you to go directly from talking to him to the Maintenance Room of the Vault, which is relatively easy to find (just follow where the heavy troops are) and is where Motor-Runner is located. There are several ways to kill Motor-Runner:

Basically, if you passed the speech check at the beginning you should send the Ranger on his way and kill Motor-Runner yourself with no resistance from the Fiends, and if you are fighting your way through you should take the Ranger with you to fight your way through the vault and kill Motor-Runner. The latter grants a slight bit more XP (52 XP as opposed to 50 XP for doing it by yourself).

If you retrieve Motor-Runner's helmet and deliver it to Colonel Hsu, he will grant you NCR fame as well as caps.

None, this is an unmarked quest.