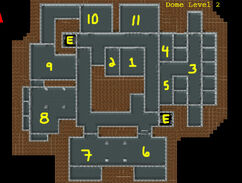 The layout description is in direct accordance with the numbered picture to the right:

All of the research labs on this level are sealed shut because they are highly contaminated. The plague research room is infested with the New Plague, and the other labs are irradiated. Codes can be found to open all the doors, but it is recommended that the player character conduct a purge of the contaminants before opening the doors.

Boulder Dome level 2 did not appear nor was mentioned in any published games, but was going to appear in Van Buren, the canceled Fallout 3 by Black Isle Studios.[1]

Retrieved from "https://fallout.fandom.com/wiki/Boulder_Dome_level_2?oldid=3175634"
Community content is available under CC-BY-SA unless otherwise noted.