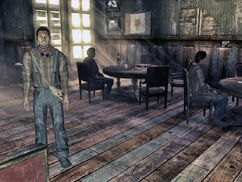 “Legionaries are next in the list of rabid dogs to put down!”

Their job is to turn the limestone excavated at Quarry Junction into concrete at the nearby refinery. The workers left after deathclaws arrived in the quarry and held up traffic on the I-15. Until the workers can resume their duties, which happens after the monsters in the quarry are exterminated, the saloon owner Ike will be complaining about the lack of business.

Claws Out: The Boulder City workers are not present in Boulder City or the Big Horn Saloon at the beginning of the game due to the infestation of Quarry Junction by deathclaws. The concrete production, as a result, has been stopped since the raw material needed for production is not flowing anymore.

The Boulder City workers appear only in Fallout: New Vegas

Retrieved from "https://fallout.fandom.com/wiki/Boulder_City_worker?oldid=3173057"
Community content is available under CC-BY-SA unless otherwise noted.