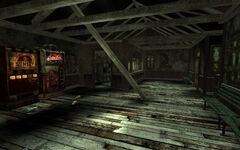 Interior of the train station

Inside the building, bark scorpions, a Nuka-Cola vending machine, a Hard locked safe, an Advanced locked terminal, and a Sunset Sarsaparilla vending machine can be found. The train station is frequented by a traveling merchant. An inaccessible Barstow Express train sits on the tracks.

Across the railroad tracks to the north of the train station, an industrial structure can be found. The rails leaving the station to the east are shattered and spread out. At the top of the industrial structure's ramp is a duffle bag surrounded by empty Jet inhalers which contains two trail mixes and some NCR money.

Close up of the locomotive

Cement factory opposite to the train station

Cement factory loot with the train station in the background

"Home of the Eagles"