Fallout: New Vegas
“With no work to be had, all the workers around here have wandered off. I'm the only one left in town.”— Ike

The Boulder City ruins is a location in the center of Boulder City, between the 188 Trading Post and Hoover Dam in 2281. The ruins are blocked off from the rest of the city by rubble and a NCR barricade. Lieutenant Monroe stands in front of the barricade.

The ruins consist of several destroyed buildings. The entrance is controlled by Lieutenant Monroe. During the quest They Went That-a-Way and Boulder City Showdown, the Great Khans have taken two NCR troopers hostage in a building on the west side. Jessup and another Great Khan are using a small shop as a holdout against the NCR, who have them pinned down.

The Boulder City ruins appear only in Fallout: New Vegas. 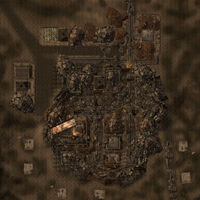