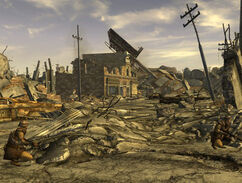 “Once the Great Khans have been killed or captured, you're welcome to retrieve any property they've taken from you.”— Lt. Monroe

Boulder City Showdown is a side quest in Fallout: New Vegas.

Jessup is holding 2 NCR troopers, Privates Gilbert and Ackerman, hostage in the Great Khan hideout, inside the Boulder City ruins. Lt. Monroe of the NCR asks the Courier's help in getting them released.

Speak to Lieutenant Monroe to begin the quest, and walk through the door behind him. From here, the player character has 3 options as to how to proceed:

Note: If one engages in hostile action with the Great Khans, the player will still be accepted with both factions. Also, if this option is chosen, Jessup will give the Courier the engraved cigarette lighter which can be given to Swank at The Tops, as evidence that Benny does not have the best interests of the Chairmen in mind.

Siding with the Khans:

Siding with the NCR: