Boulder City Showdown
Ring-a-Ding-Ding!
They Went That-a-Way
Defacing the Humble Stone
We Must Stop Meeting Like This, III

Fallout: New Vegas
“Though Boulder City survived the Great War without much damage, the NCR intentionally razed most of the town with a series of explosions during the Battle of Hoover Dam.”— Fallout: New Vegas loading screens

Boulder City is a town in the Mojave Wasteland in 2281, located west of the Hoover Dam and southeast of the 188 Trading Post.

Originally little more than a collection of ramshackle tents and sheds established along the river to house the workers building Boulder Dam, in 1930, Boulder City was established to provide adequate housing and services to the five thousand people working on the dam. Formally founded in 1931, as work began on the dam, it was a publicly owned company town operated by the Bureau of Reclamation and Six Companies, Inc. and was intended to be a model community. This included entrepreneur vetting, special permits for visitors, and a strict ban on alcohol according to the Prohibition. The city would not be incorporated until later in the century and would remain relatively small and contained, like the nearby Henderson.

A peripheral town by the late 21st century, Boulder City survived the Great War almost unscathed and became a frontier, sleepy town functioning until 2277 and the First Battle of Hoover Dam. Vacated by its denizens, the town was packed with high explosives and used as a boobytrap against Caesar's Legion. When Legion forces entered the town, lured in by Chief Hanlon's tactical retreat, the town collapsed around them. For the price of a town, the NCR broke the back of the Legion's offensive and threw it back across the Colorado River. The Boulder City Memorial pays homage to the NCR troopers who fell during the battle and can be viewed at the western end of town, near the main entrance.[1][2]

Nearly the entire town was leveled in the battle, sparing only the concrete mixing yard, the Boulder City train station, and the Big Horn Saloon. In the following years, the ruins became a stopover town for caravans and a source of concrete for the NCR's fortifications built up and down the Colorado River, produced using limestone shipped in by train from Quarry Junction.[3][4] However, because of the recent deathclaw infestation at Quarry Junction, limestone mining has come to a halt, which has, in turn, put a hold on deliveries and production of concrete. All the concrete workers that usually inhabit the town have moved on, leaving only Ike, the bartender of the town saloon, as the only resident.[5]

The location of Boulder City can be gleaned from Manny Vargas, the holodisk in his possession, or the terminal in his room in Novac. All will state that the Great Khans reside in Boulder City and the location is marked on the map. Events in Boulder City mark the beginning of Act I's climax in the main storyline. The showdown in the ruins leads to the Courier learning the identity of their would-be killer, pointing towards the New Vegas Strip.

The portions of town that are not demolished are small, and the town is nearly deserted. The concrete works and the Boulder City train station sit on the northern edge together with a locomotive sitting on the tracks. Boulder City is one of the few places in the Mojave with an abundance of ravens, but only one permanent resident. There is a traveling merchant who travels between the Big Horn Saloon and the El Dorado Gas & Service along the highway to the west, sometimes lingering by the train station. Upon arriving at the town for the first time, one may encounter Victor, who will express his surprise and excitement with seeing the Courier once more.

The entrance road leads into the town and the sole intact building, the Big Horn Saloon. The ruins of the former homes and businesses dominate the landscape and are accessible through the entrance at the northeastern end, otherwise consisting of only a stretch of ruined buildings surrounded by an impassable belt of destroyed concrete and brick.

Near the western entrance, the Boulder City Memorial can be viewed, honoring the soldiers who died at the First Battle of Hoover Dam. Private Kowalski stands before it, paying his respects to his fallen brother, PFC Donald Kowalski. The memorial's inscription reads:

“On this spot in the year 2277, Rangers and soldiers of the New California Republic turned back the forces of Caesar's Legion during the Battle of Hoover Dam. Over one hundred men and women gave their lives on the Nevada soil to defend local civilians and the principles of the republic. May this humble stone be an enduring memorial to their valor and sacrifice.”

A section of the ruins are inhabited by members of the New California Republic and Great Khans who are engaged in a standoff involving NCR hostages.

If the player character attacks the memorial with any weapon, it will cause Kowalski to confront them. The only way to avoid violence or NCR Infamy is to pass a Speech check of 30 or flee, then wait 73 hours. By then, Kowalski will have returned to New California. On the other hand, the player character can say, "You're a little bitch, and your brother was too," immediately initiating combat with both Kowalski and any New California Republic members nearby.

Remains of the town after the First Battle of Hoover Dam

Hideout of the Great Khans 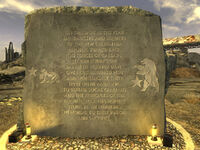