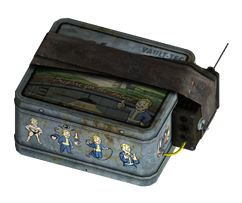 A bottlecap mine is a craftable land mine in Fallout 3. It does five times the damage of a standard frag mine.

In the locations below, all bottlecap mines are found on workbenches.

The Vault-Tec lunchbox that the mine is made from is identical to the metal lunchbox you receive with the Collector's Edition of Fallout 3.