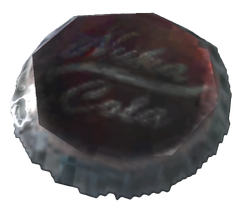 Bottle caps are the standard currency of the Capital Wasteland, and a component of the bottlecap mine in Fallout 3.

Bottle caps make a return as the standard currency of the Capital Wasteland. In addition to standard methods of acquiring bottle caps (finding, trading, stealing, killing, etc.), the player will gain a single bottle cap for each bottle of Nuka-Cola consumed. Bottle caps can also be put to use in weapon form as one of the major components of a bottlecap mine. In the Hub in Fallout, bottle caps were backed up by the Hub merchants, with one cap representing one unit of water. In the Capital Wasteland, it is not known if or who backs up the bottle caps as currency or what they represent.

Found everywhere throughout the Capital Wasteland.

Retrieved from "https://fallout.fandom.com/wiki/Bottle_cap_(Fallout_3)?oldid=3160581"
Community content is available under CC-BY-SA unless otherwise noted.