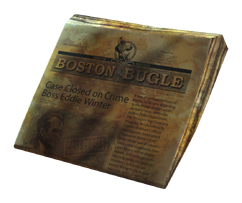 The Boston Bugle is a junk item in Fallout 4 which can be scrapped to obtain cloth.

The Boston Bugle can be broken down into its individual components for use in crafting:

There is only one sealed copy in the game, this is located near Northy's hideout south of Wattz Consumer Electronics, sitting on the ground next to the mailbox by the bus shelter.

In a move that has shocked and angered the people of Massachusetts, the Boston...

Jonathan Widmark of the BPD said: "After reviewing the evidence with our colleagues at...

It was an unexpected turn of events, to be sure. According to the Boston Bugle's confidential sources within the Boston Police Department, the "innocent man" was anything but. As uncovered by Captain Widmark's official investigation, codenamed "Operation Winter's End," Eddie Winter was involved in every crime imaginable, from petty larceny to first-degree murder. And although nothing was proved, everyone on Widmark's task force suspected Winter in the August homicide death of their lead detective's fiancé, a miss Jennifer Lands.

Whatever the truth, it would...

The full article can be found in Boston Bugle building terminal entries. 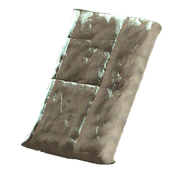 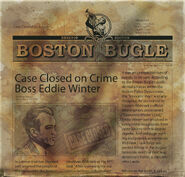 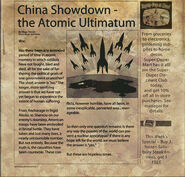 Paper with the issue about the war with China

Add an image to this gallery
Retrieved from "https://fallout.fandom.com/wiki/Boston_Bugle_(item)?oldid=3085301"
Community content is available under CC-BY-SA unless otherwise noted.