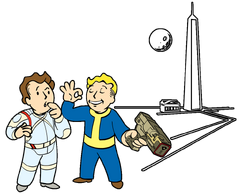 “One of our field agents, Old Man Stockton, needs help with a runaway synth, H2-22. So headquarters, as always, puts out the fires that others can't be bothered to put out themselves. The paranoid old bat won't even tell us the problem, he insists that we get our intel from a dead drop.”— Doctor Carrington

Boston After Dark is a Railroad side quest in Fallout 4.

Doctor Carrington asks the Sole Survivor to assist with escorting the newest rescued synth. They must receive a message from Old Man Stockton at the assigned dead drop or head directly to Bunker Hill and talk to Stockton inside the building. He'll respond to the security phrase with the information: that there are raiders at the drop-off location and requests that the Sole Survivor to clear the area. Passing speech checks can get more caps and/or the first mention of "Patriot."

Head to Cambridge church, indicated by the quest marker and eliminate the raiders, then wait until it's night time. Stockton will bring the synth, named H2-22, and give the all-clear sign by lighting a lamp in the window, then he leaves. Talking to the synth doesn't reveal much information since he's been told not to talk to anyone. Passing increasingly harder speech checks reveals that he was a maintenance worker at the Institute, and was treated no better than a tool.

After some time, a Railroad operative called High Rise arrives and after a brief conversation, he advises the player character there are raiders en-route to the safehouse. The Sole Survivor and High Rise will then proceed forward with H2, fighting through the raider outpost. Upon reaching Ticonderoga, they will thank the Sole Survivor for the assistance, and the location will be usable as a safehouse from then on. Speaking to the synth reveals he is scared but hopeful about his future.

Return to Carrington to receive a reward and the next quest.

Retrieved from "https://fallout.fandom.com/wiki/Boston_After_Dark?oldid=3431430"
Community content is available under CC-BY-SA unless otherwise noted.