Boston was the capital city of the former state of Massachusetts, and one of the birthplaces of American independence. It is part of the larger region known as the Commonwealth.

Boston was founded by European colonists in 1630. Many important historical events of the American Revolution, such as the Boston Massacre, the Boston Tea Party, Paul Revere's midnight ride, the Battles of Lexington and Concord, and the Battle of Bunker Hill occurred in or near Boston.[1]

The Commonwealth Institute of Technology, or C.I.T., was a prestigious university located in Boston, and the news was delivered by way of outlets such as the Boston Bugle newspaper. The city's local baseball team was vying for the World Series championship in 2077, previously having found success in 1903, 1912, 1915, 1916, and 1918.[2][3] Boston International Airport was the main hub of aviation and served the city, bringing in passengers from across the United States.[4]

During the Resource Wars, the food supply started to dwindle. Rationing sites were set up around Boston, including the Boston Police rationing site. In October 2077, an unknown person smashed the glass of the Roxbury Food Bank. Soldiers opened fire on civilians, with at least four confirmed dead and eight injured. Food riots started over the city.[5]

During the Great War, Boston itself was never hit directly by nuclear bombs, unlike an area southwest of the city. In the following weeks, local military forces seized locations like the Mass Bay Medical Center but were soon overwhelmed, causing society to finally collapse. A number of C.I.T. personnel survived by taking refuge in the underground level of the campus. In 2110, the survivors and their descendants founded the Institute, an organization dedicated to furthering pre-War science. The scientific community inhabiting the university created technologies vastly superior to anything else seen in the wasteland.

By the 23rd century, the area southwest of the city became known as the Glowing Sea. Even 210 years later, the area remains dangerously irradiated, periodically stirring up radiation storms that would breach the confines of the Glowing Sea to threaten the entire Boston region.[Non-canon 1] The city's downtown streets are fought over between various raider groups, Triggermen gangs, super mutants and Gunners.

Boston features countless major landmarks, including Bunker Hill, the Massachusetts State House, the Old North Church and others, complemented by remnants of American corporations, such as Mass Fusion. Boston was also the site of some of Vault-Tec's vaults, one of which, Vault 81, is found at the westernmost limit of the city. Though it suffered due to the passage of time, it became a prominent settlement by the year 2287. The much larger Vault 114, accessed via the Park Street station in Boston Common, was not completed by the time of the war.

The city center is composed of several tall skyscrapers which have become worn with time, visible from most locations on the map. Some have been renovated with scavenged parts, creating a ramshackle appearance. The areas outside the city center are rolling barren plains, wastelands, swamps, and the ruins of suburbs. The terrain is scattered with pockets of high and low radiation levels.

Art for some streets of Boston

Art for the downtown area

Boston Bay area, with a Protectron roaming a junkyard

Beginning of the Freedom Trail

Overview of the Boston skyline 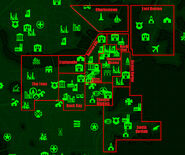 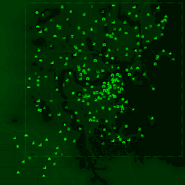 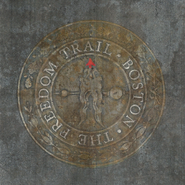 On the Freedom Trail marker