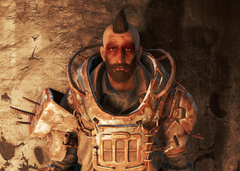 Bosco leads the gang of raiders based in D.B. Technical High School in 2287.

Bosco is the leader of the raiders established inside the D.B. Technical High School, with an prior affiliation with the trader Eleanor located southwest from the Boston Police rationing site. He is highly ambitious, with plans to take out the other groups found in Boston. After an incident with one of the dogs owned by his gang, he became infected with rabies, which led him to become extremely violent. In his terminal, he speaks of a "dangerous beast" living in the basement. The beast is in fact himself, who killed many of his lackeys during fits of rage caused by the illness.

Bosco appears only in Fallout 4.

If killed, Bosco will sometimes spawn again with the same name and a new model and characteristics (including changing gender to female), but without the mascot headwear. [verified]

Bosco female bug
Add an image to this gallery

Retrieved from "https://fallout.fandom.com/wiki/Bosco?oldid=3223091"
Community content is available under CC-BY-SA unless otherwise noted.