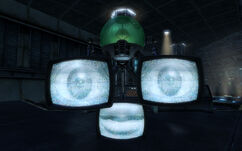 “Fwooooooosh! That... is the sound of FLUSHING.”

Doctor Borous is a scientist living in Big MT in 2281.

Before the Great War, the boy who would later become Borous was a child prodigy who had been bullied in American High by a classmate named Richie Marcus. He also had an unrequited crush on another student, Betsy Bright, who had turned him down for Richie and picked on him as well. His only friend was his dog, Gabe.

Later in his life, he became a part of Big MT's staff as head of the X-8 cyberdog project and began cruelly experimenting on his own dog Gabe, feeding him various drugs such as psycho. Numerous other animals also fell prey to his vicious experiments, but only Gabe remained faithful and loyal, answering malice and cruelty with love and attachment. Sometime before the Great War, Gabe was eventually transformed into a prototype model of the cyberdog. However, due to errors in programming, he was forcibly sealed in an unfinished section of X-8's test areas, as a "...precaution."

After the Great War, together with the rest of the Big MT "Think Tank" executives, the doctor became a think tank to continue his work at Big MT. However, when he started to show symptoms of the insanity that began to consume his comrades, Doctor Mobius, the sole sane researcher, wiped his pre-War memories, hacked his data banks and gave him the name "Borous", all to keep him and his colleagues forever trapped in the Big MT, so that they could never unleash the horrors of the crater on the unsuspecting world around them.

Doctor Borous is the "Head of Animalogy, Beastology, and DNA-Scrambling technology" at the Big MT, and created both the night stalkers and cazadores. He also claims to be responsible for creating the radar fence around the crater.

Retrieved from "https://fallout.fandom.com/wiki/Borous?oldid=3365426"
Community content is available under CC-BY-SA unless otherwise noted.