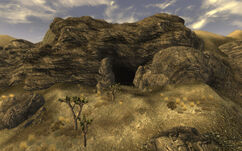 Bootjack Cavern is an unmarked location in the Mojave Wasteland that is east of the wrecked Highwayman.

The cavern can be found by heading due east toward the Lucky Jim Mine until reaching the cliff face, then heading north along the cliff. The cavern entrance faces west, towards the road. The cavern is a small cave consisting of three sections which are populated by fire geckos.

Pile of fire gecko eggs
Add a photo to this gallery
Retrieved from "https://fallout.fandom.com/wiki/Bootjack_Cavern?oldid=3435903"
Community content is available under CC-BY-SA unless otherwise noted.