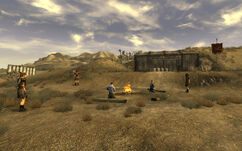 Rescue the captives from the Legion camp

“Yeah, a bunch of those Legion fucks dragged them off right away. They were headed east, if you're feeling heroic.”— Boxcars

Booted is a side quest in Fallout: New Vegas.

During the Courier's visit to Nipton, they will notice that something isn't right. When they first enter the town they will meet Oliver Swanick, who seems to be over-excited about winning "the lottery" and keeps repeating that he has won. Going further into the town, the Legion has taken over the town and killed almost everyone. While searching through the town, the Courier will find a man called Boxcars in the General Store.

Boxcars reacts to the Courier in different ways, depending on their reputation with the Powder Gangers. If it is a positive reputation, he will ease up recognizing them and say that he needs some pain relief. If the Courier has a neutral reputation, he thinks they're going to kill him. If the Courier has attained a bad reputation, he exclaims about how down on his luck he is, because after the preceding events, the Powder Ganger's "Grim fucking Reaper" has just shown up. His legs are crippled by the Legion and he tells the Courier about the lottery that the Legion played with the town of Nipton. The mayor of Nipton had the lottery ticket to be burned in a pile of tires.

Boxcars was lucky enough to be left alive but they smashed his legs, and he is now crippled. He explains to the Courier that some of the Powder Gangers were enslaved by the Legion and taken east. He mentions that his legs are in a lot of pain and he needs Med-X. The Courier then has the option to spare some for him (a choice of up to five doses).

Retrieved from "https://fallout.fandom.com/wiki/Booted?oldid=3328125"
Community content is available under CC-BY-SA unless otherwise noted.
... more about "Booted"
RDF feed
Has platform
PC +, Playstation 3 +  and Xbox 360 +