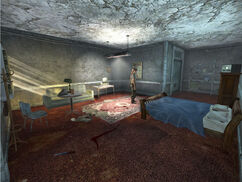 Boone's room is the residence of Craig Boone in the Dino Dee-lite Motel in Novac.

The layout of Boone's room is similar to the layout of the other motel rooms. It has a bed, bathroom, couch, and tables.

Retrieved from "https://fallout.fandom.com/wiki/Boone%27s_room?oldid=3278357"
Community content is available under CC-BY-SA unless otherwise noted.