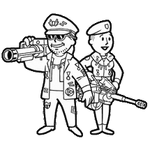 “The Boomers are said to be xenophobic tribals armed with even more firepower than the Gun Runners. No one ventures into or out of their heavily guarded lands.”— Loading screen

The Boomers are an isolationist tribe occupying the Nellis Air Force Base in the Mojave Wasteland in 2281.

At the beginning of the war, Nellis Air Force Base scrambled an enormous number of fighters and bombers to respond to the missile launch. None of those planes ever returned. Additionally, despite the best efforts of a man named Mr. House, some of the missiles that struck the greater Las Vegas area impacted Nellis. As a result, the area was not an attractive site for salvagers for over a hundred years after the war.

A little over fifty years before 2281,[1] a group of Vault 34's dissidents struck out on their own and started using Nellis as a base. Over a long period of time, they eventually decided to call Nellis their home. They learned a great deal of information from the records at Nellis and used the information to open the weapons storehouses at unknown locations called Area 2 and the Hawthorne Army Depot.[2] The result of their efforts was an enormous stockpile of heavy ordnance, artillery, and small nuclear weapons.

The Boomers have a penchant for paranoia and hostility towards outsiders. This, combined with their affinity for explosives, led to New Vegas locals calling them "Boomers." The tribe did not mind the name as long as it meant people kept their distance. While the Boomers' xenophobia has kept away trouble, major factions in the Mojave have also attempted to gain their favor. However, no matter who approaches them (Mr. House, the Three Families, NCR, or Caesar's Legion), the Boomers have the same response: artillery.[3]

The Boomers grow their own crops in thriving farms that they have learned to develop over the decades they have been in the base. Solar panels at the Nellis array provide power for the tribe, and they also have a clean water supply that they draw from Lake Mead.[4][5] At some point, the NCR attempted to shut off the Boomers' water supply. The Boomers' response was to shell sections of the NCR's water pipeline in eastern New Vegas, which led to the NCR quickly retracting their decision and restoring the water flow. In the months that followed, no one else has tried to approach or antagonize the Boomers, a status quo that they greatly prefer.[3]

Having left Vault 34 and finding the Nellis Air Force Base, the Boomers had to find new clothes that reflected their independence. They found old military jackets in the base and used them over their vault jumpsuits. Each jacket sports several military medals for decoration, and embroidered on the back is the number "34," as to never forget where they came from.

They are a self-sufficient society, producing food, weaponry, and power all inside their base. As a result, they need no relations with the outside world.

They believe that self-armament is the key to a peaceful society, meaning that each Boomer carries a weapon and will not hesitate to use it when the time calls for it.

The Boomers are attached to their history, whether past or present. A large fresco in their museum tells of their great epic:

The left part represents the Boomers emerging from the vault, exterminating the "savages" they encountered with frag mines and grenades. The middle section, which represents the current state of the Boomers, show their discovery of the air force base. There, they prospered, multiplied, and kept the "savages" from distance with the artillery they have. The bubble above the small pods next to the artillery is them flying flight simulators to train to fly the bomber. The right-most section represents the Boomers' future where they hope to unleash "high-explosive ordnance upon ignorant savages" with the bomber they hope to restore.

Their structure is very basic; there is a leader, a doctor, a teacher, guards, mechanical technicians, and a keeper of the story to keep their history. Only the leader can give orders to the others and has absolute power over everything.

The Boomers have an extremely small but efficient military, consisting of basic guards, mortar teams, the Master at Arms, and the elder. A combination of guards armed with man-portable explosive launchers and howitzer teams will bomb the area south of Nellis when somebody enters targeting range, with the exception of intruders who make it close enough to the fence, in which case they will either detain the intruder or kill them. The commanding officer, called the Master of Arms, coordinates the guards in both defensive and offensive (mainly diversionary) operations, and the elder of the Boomers has the ability to issue new orders and alter or override existing orders with all forms of military and security procedures without contest.

Should the Courier help recover the B-29 Superfortress from Lake Mead, the Boomers add the bomber to their arsenal, making them one of the few factions in the wasteland with functional air power.

The Boomers also have a number of operational Mister Gutsies at their disposable. These robots serve as as border guards and can be found patrolling the perimeter of the the base.

They are hostile towards anyone who tries to approach their base and refuse to trade with anyone. However, due to the powerful weapons they control, the main factions surrounding the area have expressed their interest with them. The NCR hopes to establish diplomatic and trade relations with the Boomers, while Caesar's Legion seeks to absorb them into their ranks. Mr. House wants their weapons aimed at his enemies.

Coming from one of the most heavily-armed Vaults in existence, Boomers are extremely well-equipped. They each have a Pip-Boy 3000 and are well versed in the use of explosives. They have missile launchers, grenade launchers, Fat Man launchers as well as many old military howitzers that they use to repel anyone trying to make their way to the base. Many Mister Gutsy robots have been reprogrammed by the Boomers to protect them. These robots can also break down and transport large objects quickly and efficiently, as stated by Loyal regarding the extraction of the bomber they are aiming to acquire.

Within the hangar are flight simulators that can teach any Boomer to fly; these pods are highly similar to the ones found in the Hidden Valley bunker. They have no working planes, but this does not keep them from flying, at least virtually. These simulators need access codes to function. The Courier can be told about them, from Loyal by passing a Speech check; no matter what the Courier's reputation is with the Boomers, they cannot be opened.

The base produces its energy through solar panels, cultivates its own crops inside, and draws an unlimited supply of water from Lake Mead thanks to their close proximity.

During the Courier's time with the Boomers, Master at Arms officer Raquel will state that the Boomers' ordnance is getting low, down to a five-year supply. Similarly, Jack will request more scrap metal for future use. These requests demonstrate a mastery over logistics and stockpiling, which many factions in the Mojave simply lack.

The Boomers appear only in Fallout: New Vegas.

The Boomers were created by John Gonzalez.

Retrieved from "https://fallout.fandom.com/wiki/Boomers?oldid=3322318"
Community content is available under CC-BY-SA unless otherwise noted.