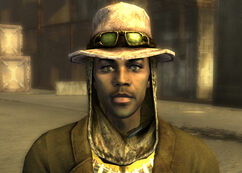 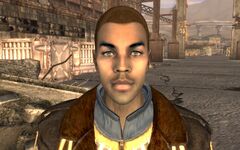 The munitions manager without his hat

“Sure. Pearl gave the green light, take a look at the manifest.”

The Boomer munitions manager is the weapons stock manager for the Boomers living at Nellis Air Force Base in 2281.

He keeps the armory for the Boomers at Nellis Air Force Base and can be found in the mess hall & munitions storage. The player character can trade with him after Pearl gives permission. The permission is automatically granted after the player character has gained a reputation of at least "Accepted" with the Boomers. He resets just like the rest of the vendors, every Wednesday and Sunday.

The Boomer munitions manager appears only in Fallout: New Vegas.

Retrieved from "https://fallout.fandom.com/wiki/Boomer_munitions_manager?oldid=3173054"
Community content is available under CC-BY-SA unless otherwise noted.