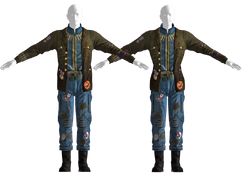 The Boomer jumpsuit is a piece of clothing in Fallout: New Vegas.

It provides a Damage Threshold of 4. It appears to be a Vault jumpsuit with a flight jacket over it, decorated with medals and ribbons and a necklace of spent bullet casings. A large "34" has also been sewn on the back. The number pays homage to the days when the Boomers were fresh out of Vault 34. Patches stitched onto the suit and jumpsuit belong to the 827th Bombardment Squadron, 15th Air Force, 29th Bomb Squadron, and the 21st Bombardment Squadron.

Several real world medals and ribbons can be seen hanging from the jacket, such as the silver star.

A breakdown of the patches
Add an image to this gallery
Retrieved from "https://fallout.fandom.com/wiki/Boomer_jumpsuit?oldid=3102134"
Community content is available under CC-BY-SA unless otherwise noted.