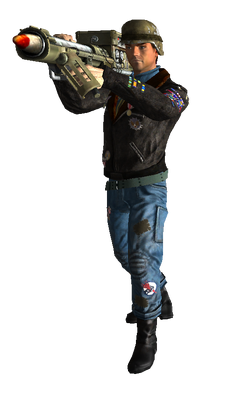 “Hold it right there! Don't you move! How the hell did you survive that bombardment?”

Boomer guards are sentries tasked with protecting the fenced entrance leading into the Nellis Air Force Base.

The Boomer guards are essentially the final defense against any intruder if all of their other ordnance fail. This is mostly due to the fact that the Boomers are xenophobic, surprisingly though they will ask the Courier what they are doing rather than shoot them on sight.

Upon meeting them for the first time, they are rather cautious and rude, as Boomers view outsiders as "savages."

Retrieved from "https://fallout.fandom.com/wiki/Boomer_guard?oldid=3269483"
Community content is available under CC-BY-SA unless otherwise noted.