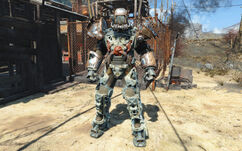 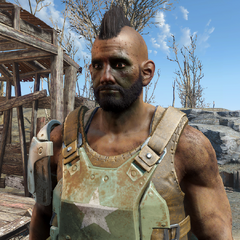 Boomer is a raider leader at Outpost Zimonja in 2287.

Boomer is occupying Outpost Zimonja along with a small handful of raiders. He is armed with a Fat Man and wears an incomplete set of raider power armor.

He will attack the Sole Survivor on sight, along with the rest of the raiders at the outpost. After running out of mini nukes, he will either attempt to evade combat or engage in a melee fight.

Boomer appears only in Fallout 4.

Retrieved from "https://fallout.fandom.com/wiki/Boomer_(Fallout_4)?oldid=3288669"
Community content is available under CC-BY-SA unless otherwise noted.