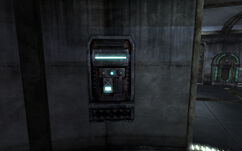 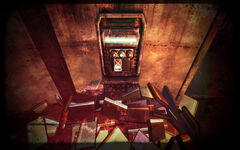 “The Commies have eyes everywhere, Citizen. And that means they're not just Commies. They're Peeping Toms!”

The Book Chute is a mechanical device located in the Sink. Like all the other systems there, it was disabled shortly after Doctor Mobius left the Think Tank for the Forbidden Zone. When his personality back-up is recovered from Doctor Klein's house (House 101 in Higgs Village), he speaks like a dystopian authority, promising to protect citizens from "seditious material," namely pre-War books.

According to his dialogue, he was also supposed to come equipped with an indoctrination module, but it was stripped to suit the R&D budget. He instead instructs the player character in how to perform a form of self-indoctrination, involving a small cage and a sack of mole rats. The Book Chute also dislikes communism, and anything related to it, often commenting on it when the player character is nearby.

All My Friends Have Off Switches: The Book Chute is one of the appliances the Courier must upgrade.

The Book Chute converts old books into blank books, with each old book turned in yielding one blank book. The books that it will accept are as follows:

These blank books can, in turn, be used at a workbench to create one skill book of each type. The player character will need to acquire the recipe holotape (which are single-use items) for the skill book they wish to assemble, as well as 25 blank books and two bottles of wonderglue.

Retrieved from "https://fallout.fandom.com/wiki/Book_Chute?oldid=3469305"
Community content is available under CC-BY-SA unless otherwise noted.