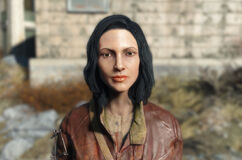 Bonnie Tournquist was one of the nurses at the Mass Bay Medical Center in 2077. She, along with her family, made her home in the suburb of West Everett Estates before the Great War.

Bonnie is the wife of Wayne Tournquist and the mother of Michael and David Tournquist. She was a nurse at Mass Bay Medical Center before, during and after the Great War. While her husband and sons made it to safety in their bunker at their suburban home in West Everett Estates, Bonnie could not leave the hospital; as the military had taken over the hospital after the bombings as well as a large amount of casualties pouring into the hospital. Bonnie and the other nurses could do little to treat their patients and sometime following the war, Bonnie and some of the others apparently left.[1] From Wayne's logs, it is known that Bonnie never made it home.[2]

Bonnie Tournquist is mentioned only in Fallout 4.

Retrieved from "https://fallout.fandom.com/wiki/Bonnie_Tournquist?oldid=3206147"
Community content is available under CC-BY-SA unless otherwise noted.