Bonnie Springs is a location in the Mojave Wasteland in 2281, located almost due north of the Goodsprings Cemetery, northeast of the tribal village and southeast of Spring Mt. Ranch State Park.

In 2281, this ghost town is crumbling into the dirt, its memory and true history slowly fading. However, it is still used as a landmark for travelers and is occasionally picked over, the latest of who are a gang of Vipers.[Non-canon 1]

Bonnie Springs is an abandoned ghost town along Nevada 159. It features a single main street leading to a boarded-up saloon, flanked by destroyed and otherwise derelict buildings. A grave is located on the nearby hill to the west of town. The town is occupied by well-armed Vipers, four regular Vipers, and two leaders equipped with plasma grenades and a trail carbine respectively. Once killed, the area will be taken over by cazadores on return visits. Wiping out the cazadores can lead to a blind deathclaw spawning here.

The corpse of the Viper leader with Love and Hate never disappears.[verified]

View from south side

View from the north 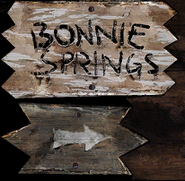