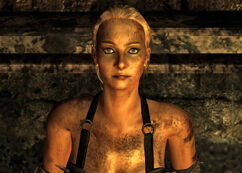 “Those Bear Brothers never saw you comin', did they?”

Bone is a Pitt raider who watches Pitt slaves in the Mill in the year 2277.

Born in 2258,[1] Bone is not quite as vicious and uncaring as the rest of the maniacs loyal to Ashur. She guards the slaves inside the Mill, and is generally unpleasant to speak to until one can prove themselves in the Arena. Once one's mettle is unquestioned, Bone will change her tune, and they can receive a semblance of a civil conversation.[1]

Bone can be found leaning against the wall, opposite the entrance to the office that leads to the steelyard. During fights in the Arena, she can be seen in the audience above the fight area.

Bone appears only in the Fallout 3 add-on The Pitt.

Retrieved from "https://fallout.fandom.com/wiki/Bone_(character)?oldid=3433388"
Community content is available under CC-BY-SA unless otherwise noted.