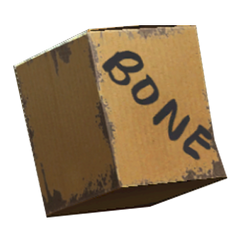 Bone is a crafting component in Fallout 4.

Made from the bones and teeth of dead humans and animals, bone is a component used to craft various mods and tools. Bone is most useful for crafting cutting fluid at the chemistry station; cutting fluid, in turn, can be scrapped for oil.

Retrieved from "https://fallout.fandom.com/wiki/Bone_(Fallout_4)?oldid=3407998"
Community content is available under CC-BY-SA unless otherwise noted.