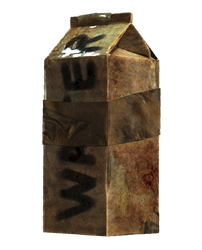 Boiled water is a consumable item in Fallout 76.

Boiled water is acquired when a player character boils dirty water, assuring that an effective pasteurization temperature is reached to kill or inactivate waterborne pathogens. Boiling makes the water microbiologically safe but does not filter radiation damage, meaning that the player character will still endure rads when consumed.

Boiled water is easily made and readily available, it can be commonly found almost anywhere. Boiled water is also a key component in crafting other liquid food items such as teas and soups.

Retrieved from "https://fallout.fandom.com/wiki/Boiled_water?oldid=3476280"
Community content is available under CC-BY-SA unless otherwise noted.