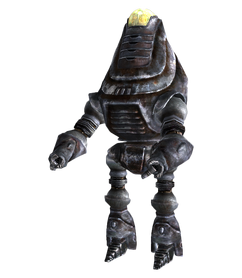 “Greetings! I do not believe we have met before. I have the singular distinction of being designated as Bohr.”

Bohr is Keely's protectron assistant and was to be found in Vault 22 in 2281, but he was cut from the final game.

Bohr assists Keely with her research in Vault 22 and his duties include computing protein sequences. He was ordered to wait for her return by Keely before she went down to the lower levels and has been waiting for her return ever since.

Bohr's dialogue gives the player the opportunity to ask where Keely is, although he does not know the specific answer. The player can also ask what he knows about Vault 22, but he doesn't know the answer to that, either.

Bohr was to appear in Fallout: New Vegas, but was cut before final release.

Bohr is named after Niels Bohr, an acclaimed physicist.

Retrieved from "https://fallout.fandom.com/wiki/Bohr?oldid=3128832"
Community content is available under CC-BY-SA unless otherwise noted.