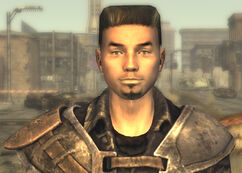 Bodyguard, near the Freeside's north gate

“I probably don't have to tell you that Freeside's dangerous, but you might want to think twice about hiring one of those guards at the gates. They're not all saints, is all I'm saying”— Rotface

In Freeside, near the gate to North Vegas Square, two bodyguards can be found for hire along with a Kings gang member standing on the street. Pay the bodyguard for hire 100 caps and he will follow the Courier through Freeside until they leave. The other one is Orris, who charges double. The Courier is required to expose Orris' scam or kill him in the quest G.I. Blues.

The bodyguard attacks anyone who attacks the Courier, mostly Freeside thugs.

Bodyguard for hire appears only in Fallout: New Vegas.

Retrieved from "https://fallout.fandom.com/wiki/Bodyguard_for_hire?oldid=3173051"
Community content is available under CC-BY-SA unless otherwise noted.