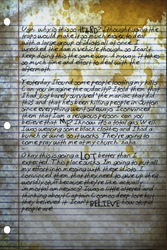 Body shop note is a paper note in Fallout 76.

The note can be found in Sutton in a garage with a destroyed off-road vehicle at the entrance, next to a white house near the Red Rocket. The note will be sitting on top of a yellow drum.

Ugh, why is this so HARD? I thought using the traps would make it so much easier to deal with a large group of idiots all at once. I wrecked the damn vehicle though, so I can't keep doing this the same way. Anyway, it takes so much time and effort to deal with the aftermath.
-
Yesterday I found some people looting my kills. Can you imagine the audacity? I told them that I had just barely survived 'the maniac that did this' and that he's been killing people in Sutton since everything went sideways. I convinced them that I am a religious person, can you believe that. ME? I know, it's a total gas. Well, I was wearing some black clothes and I had a bunch of wine, so it works. They're going to come pray with me at my church, haha.
-
Okay this is going a LOT better than I expected. This place sucks, I'm going to put all my effort into messing with these idiots. I convinced them that they need to give up their worldly stuff because they're like, actually immortal amnesiacs? I was a little altered and thinking about Captain Cosmos deep lore but they believed it. I can't BELIEVE how stupid people are!

Retrieved from "https://fallout.fandom.com/wiki/Body_shop_note?oldid=3069834"
Community content is available under CC-BY-SA unless otherwise noted.