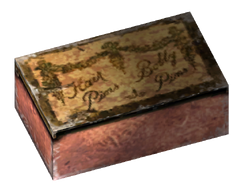 The bobby pin is a miscellaneous item in Fallout 3 and Fallout: New Vegas. It replaces the lock picks from Fallout and Fallout 2.

A flexible double-pronged hairpin, made of metal or plastic, normally used to hold hair in place. After the Great War its use also includes lockpicking.

Retrieved from "https://fallout.fandom.com/wiki/Bobby_pin_(Fallout_3)?oldid=3129750"
Community content is available under CC-BY-SA unless otherwise noted.