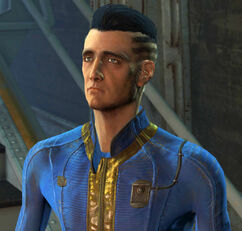 Dependency
Hole in the Wall

“Hey, you're back. I don't suppose you came across some Jet while you were gone?”

Bobby is assigned to work in the reactor room with Old Rusty, but does not complete any of the work himself. He is addicted to Jet, supplied by his sister Tina De Luca which he stashes behind a false panel hiding the door to the observation wing of the vault. When he is not using Jet he is drunk, according to Gwen McNamara's terminal logs. He is also known as Robert De Luca.

Bobby's addiction to chems is catalytic in bringing about the events of Hole in the Wall, as being seen hiding his stash by Austin Engill leads to the child being bitten by one of the mole rats.

Bobby seems to have the Anchorage hairstyle from the unused issue 5 of La Coiffe magazine.

Retrieved from "https://fallout.fandom.com/wiki/Bobby_De_Luca?oldid=3122806"
Community content is available under CC-BY-SA unless otherwise noted.