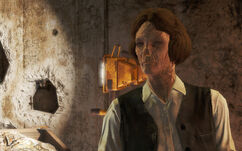 “What is going on in my tunnel?”

Bobbi No-Nose is a corrupt mobster living in Goodneighbor in 2287. She initially is found inside her hideout.

A self-proclaimed "legitimate" businesswoman operating out of Goodneighbor, every place Bobbi sets up shop in soon becomes her base of operations.[1] She, while her influence is small, is a highly ambitious woman, not like the chem dealers and petty thieves in town. Recently, No-Nose is preparing to pull off a large heist in Mayor Hancock's strongroom in the NH&M Freight Depot to the southwest. She has a long history of trouble with the ghoul and aims to get back him by breaking into his property and stealing anything of value.[2]

Through a spy she planted within the raider gang in the Massachusetts State House, Bobbi managed to acquire an accurate map of the Boston underground, created by a city official before the Great War.[3] To recruit diggers for her project, the Big Dig, and further her vendetta against Hancock, Bobbi passes it on as a scheme to get revenge on Mayor McDonough for banishing her kind from Diamond City. The target is supposedly a secret strongroom located directly beneath the mayor's office, which Bobbi claims is home to a huge stash, containing thousands of caps, a large cache of weapons and other valuable loot. She promises her staff caps and a share of the spoils when the job is done.

For months, work is slow and the project has barely progressed. In fact, the miners are soon driven off by mirelurks by the time the Survivor arrives, having accepted Bobbi's job. This in turn makes them her new gun. To help expedite the excavation, she has them get her old tech expert, Mel, from the Diamond City lockup to assist preparations by whatever means the Sole Survivor sees fit.

Bobbi appears only in Fallout 4.

Retrieved from "https://fallout.fandom.com/wiki/Bobbi_No-Nose?oldid=3124477"
Community content is available under CC-BY-SA unless otherwise noted.