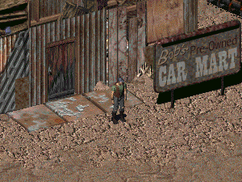 “These cars have been given a full 100-point service by our dedicated service department.”

Bob is a used car salesman who runs Bob's Pre-owned Car Mart in 2161.

Bob is a confused wastelander, who came across a pre-owned car dealership. He seems to be stuck in his own little world of pre-owned cars and has an imaginary crew, that fixes his imaginary cars.

Bob can be found in a special encounter while traveling through the wastes. He offers to sell used cars to anyone who passes his shack, despite all of his supposed vehicles being burned-out husks. When confronted about this, he goes into extreme denial and points towards an empty patch of desert where he claims his "dedicated service department" is working on a "newly-purchased" Corvega. Two pellet guns can be found in his home: the Red Ryder BB gun and the unique Red Ryder LE BB gun.

Bob appears only in Fallout.

Retrieved from "https://fallout.fandom.com/wiki/Bob_the_pre-owned_cars_salesman?oldid=3354570"
Community content is available under CC-BY-SA unless otherwise noted.