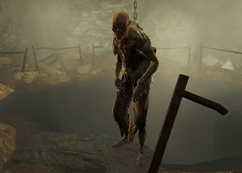 Bob Stanson is a ghoul found in The Commonwealth in 2287.

Bob Stanson was formerly the project manager for Station 1 in the Dunwich Borers quarry excavation prior to the Great War. He was a project manager who took his job rather seriously, so much so that Tim Shoots and the "management" deemed it necessary to lure Bob and the other station managers into a trap near Station 4 to keep them from finding out what was really going on in the excavation. Since this event transpired, he has become a feral ghoul, guarding the room over the enshrined Kremvh's Tooth.

Bob Stanson appears only in Fallout 4.

Retrieved from "https://fallout.fandom.com/wiki/Bob_Stanson?oldid=3177229"
Community content is available under CC-BY-SA unless otherwise noted.