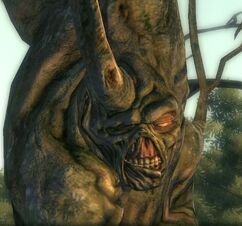 Bob is a species of tree that is a result of mutation, progressively growing from within Harold.

Bob sprouted from Harold's head sometime between 2162 and 2208, after Harold was exposed to the Forced Evolutionary Virus at the Mariposa Military Base. In the beginning, Bob was a small sprig but its growth accelerated, turning into a full-sized tree, overtaking Harold, and rooting itself to the ground in the Capital Wasteland region.[1] As of 2277, the two have been rooted to the location for over two decades.[2]

Bob and Harold were later discovered by several people who began to worship the discovery, founding a group known as the Treeminders. They started worshipping the mutant tree collectively as a deity, of which Harold reports Bob's disdain for.[3] Bob does not dislike all the Treeminders, as Harold points out he and Bob's adoration for Yew, the child of the group.[4]

Harold considers Bob his friend and speaks to him as if he was thinking aloud. Harold will sometimes jokingly refer to Bob as Herbert, which he says drives Bob crazy.[5] Harold will share some of the mischief he and Bob have caused over the years, such as Bob telling him to make the Treeminder Maple stand on his head for an entire day.[6]

Harold details his past with Bob, explaining how after the two of them were rooted in place, Bob subsequently began to blossom, extending its reach outward, resulting in a lush green habitat named Oasis. Seeds that have taken root in the region are a result of seed pods carried by the wind, affectionately called "Herbert's seeds" by Harold.[7]

When the Lone Wanderer approaches Bob and Harold for the first time, Harold will share that he was able to see their approach through the leaves of other trees, and although impressive, it makes Bob jealous.[8] Harold will share his sadness at he and Bob's current state, confiding that living the way they are is miserable to him, to be trapped in one place for an eternity, and asks the Lone Wanderer to kill he and Bob.[9] The player character can speak with Harold and Bob about the request and they will be steadfast in the request, not wishing to remain there for hundreds of years, explaining that they can't kill themself and they wish to be at peace, resolute in the decision to be "just me and Bob until the end."[10][11]

Bob appears in Fallout 2 and Fallout 3. He was intended to appear in Van Buren and was mentioned in Fallout: Brotherhood of Steel.

Bob on Harold's head in 2241, before he was rooted to the ground

Harold and Bob in 2277
Add a photo to this gallery

Retrieved from "https://fallout.fandom.com/wiki/Bob_(tree)?oldid=3361246"
Community content is available under CC-BY-SA unless otherwise noted.