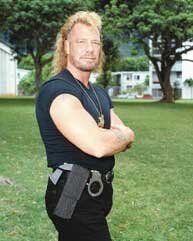 Bob is a bounty hunter at Hoover Dam's downtown in 2253.

Bob was a settler and running Hock-it-to-Bob long before Dodge and his entourage came. He used to run his shop out of a tent along the Rim. Now, he has a nice, sturdy shack in downtown to conduct business, and business has been decent, even though there's a war. Bob is a tough, no-nonsense man in his mid-fifties.

When other people get sick of their crap, or they need money to pay off one of Dusty's tabs, most folks at Hoover come to see Bob of Hock-it to Bob. In modern terms, Bob would be a pawn dealer. Every month Bob has something new to sell, so the player character can check out Bob's wares just to see if there is something they have to have.

He is given a job to kill El Diablo, a crazy man who thinks he is a vampire. El Diablo isn't going to come quietly, though; he might just bite Bob's neck.

A severed head is found on El Diablo if he is killed by the player character. This may have been meant to be Bob's head, indicating his failure to kill Diablo.

Bob was going to appear in Van Buren, the canceled Fallout 3 by Black Isle Studios.

Retrieved from "https://fallout.fandom.com/wiki/Bob_(Van_Buren)?oldid=3338735"
Community content is available under CC-BY-SA unless otherwise noted.