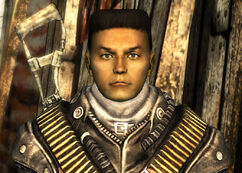 Second-Commander of the Army of Dave

“Dave made me Second-Commander of the Army of Dave, and that means I get a gun. Don't make me have to use it.”

Bob is Dave's eldest son and second in command of the Republic of Dave in 2277.

Born in 2258, Bob is young, hotheaded and bossy, and has been given the title of "Second-Commander of the Army of Dave." He is nineteen years old, thinks of himself as Vice Dave, insisting that he knows best and that all citizens of the republic should listen to him. From his speech, before him becoming an emperor, he appears to possess dictatorship tendencies.

Although Dave will not talk badly to Bob in public, it is widely known that he really lets Bob have it when the two are alone. Bob cannot stand his father and is looking forward to establishing the Empire of Bob.[1] Although Bob is Asian, both his father Dave and biological mother Rosie are Caucasian.

Bob can be found at the Republic of Dave grounds during the day. At night Bob sleeps in the men's quarters.

Bob will wander between the Republic of Dave buildings, approaching their outer walls and repairing them with a wrench in his hand. This results in no actual change. He can, on occasion, be found practicing at the shooting range.

Bob appears only in Fallout 3.

Retrieved from "https://fallout.fandom.com/wiki/Bob_(Republic_of_Dave)?oldid=3308511"
Community content is available under CC-BY-SA unless otherwise noted.