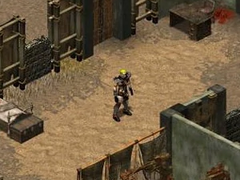 “RRrrrrrr! You no allowed to be here. Bo stuff you down pants!”

Bo Duffy is one of the four main leaders who control the raiders in the region of Chicago in 2197.

Bo was dropped on his head a few too many times when he was a baby. He isn't the brightest kid on the block, but he's beefy and he likes to kill stuff. That pretty much makes him good raider material.

He is eventually found and killed by the Warrior and his team. It is said than all Raiders bodies, including Bo's, were later recovered by the Brotherhood and displayed around the region in crucifixion, to discourage anybody to follow their path.

Bo's use of grenades in a closed space makes almost sure than he killed myself when attempts to attack the Warrior.

His name is a reference to Bo Duke, one of the Duke family members from the early 80-ties television series The Dukes of Hazzard.

Retrieved from "https://fallout.fandom.com/wiki/Bo_Duffy?oldid=3485397"
Community content is available under CC-BY-SA unless otherwise noted.