Bo-Peep was the code name of a the Bysshe Company operative who lived in Appalachia before the Great War. She was Calvin van Lowe's (code name "Blacksheep") handler.[1][2] While overseeing van Lowe's work, she maintained a small monitoring station on the rooftop opposite Van Lowe Taxidermy.[3]

Despite having fought hard for the job, Bo-Peep became worried when van Lowe's efforts to develop a new product for Bysshe were not panning out as quickly as one would hope.[4] This was driven by pressure from her superiors, in particular, a senior Bysshe operative with the code name Big Bad Wolf, who did not share her enthusiasm for van Lowe's projects.[5]

She was killed by a modified assaultron unit developed by van Lowe while waiting to meet him in Bastion Park,[6] after it had already killed van Lowe and escaped from his lab.

Bo-Peep is mentioned only in Fallout 76, introduced in the Wild Appalachia update.

Bo-Peep's monitoring station, on a rooftop opposite Van Lowe Taxidermy 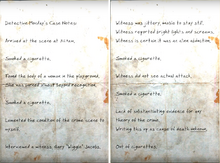 Retrieved from "https://fallout.fandom.com/wiki/Bo-Peep?oldid=3266862"
Community content is available under CC-BY-SA unless otherwise noted.