Blue Paradise Vacation Rentals is a location in the Mojave Wasteland, located just south of the Cottonwood overlook and Cottonwood Cove along the western bank of the Colorado River.

As the Colorado River flood plain has risen, a small cluster of chalets has slowly sunken into the sand, and an old wharf and a pair of boats have vanished completely underwater.

Three beach houses, a small picnic area, submerged docks, and many submerged boats, including speed boats and a yacht make up this small lakelurk nest. Only two of the beach houses are accessible, containing only minor loot and a small amount of radiation. To the southwest of the houses, there are two graves with minor loot.

Across the river, directly east of the sunken beach houses, is a small lagoon area where several lakelurks appear to be guarding a small cave. There are up to 13 lakelurks in the area. The small cave contains two duffle bags, along with two dead bodies, and some decent loot. 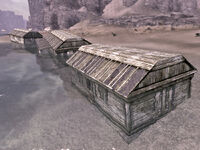 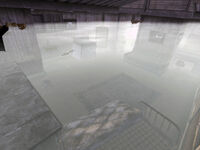 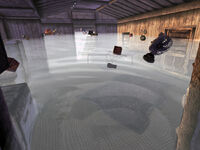