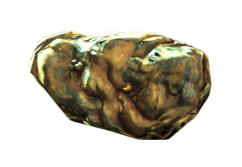 Bloodworm meat is a consumable item in the Fallout 4 add-on Nuka-World.

When Survival mode is active, this item reduces hunger by 5 points but increases the chance of disease by 12% at the next disease check.

Obtained from bloodworms within Dry Rock Gulch and around Nuka-World.

Retrieved from "https://fallout.fandom.com/wiki/Bloodworm_meat?oldid=3315324"
Community content is available under CC-BY-SA unless otherwise noted.